I should maybe put this on the Life List page, but the list of books is getting rather tedious there. Since I last updated it, I have read Becoming a Psychotherapist, Days in the Lives of Social Workers, The Girls Come Marching Home, Once a Warrior, Always a Warrior, The Three of Us and The Courage to Create. That’s 6 books for a total of 41 books since I started the Musing Mighty Life List, if I haven’t forgotten any, which I might have. If it’s all the same to you, we will skip the backed up reviews and just try to do better from now on, ummkay? Kay.

Speaking of reviews, I think I might have mentioned that I have a horrendously tall stack of TBRs. Actually, I now have 4 reasonably short (approximately 2 feet) stacks. That is a lot of books, right? One of my goals for this year is to eliminate that stack of books, either by reading them or deciding not to read them, and/or giving them away/selling them. But another of my goals for the year is to work on my crafty life, including getting my craft books organized and actually making stuff. Yesterday, I pulled all my knitting books together, except for the ones in those stacks, and this morning, I pulled those out. So, in order to accomplish three goals at once over the course of the month, you get some knitting book reviews. Yay!!!!! 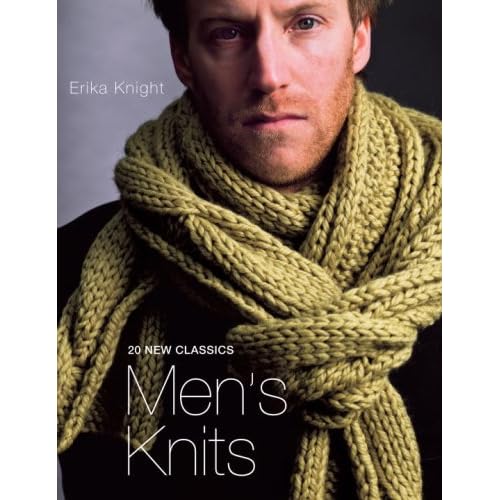 Up first, we have Men’s Knits by Erika Knight. Apparently, I have had this book for about 3 years, since I have been SINGLE for almost that long. Yep, I’m a little behind. We’ll get over it. Of course, it helps that the boyfriend sweater is always in style, and this way I can have the sweater without the boyfriend, right? And also, except for the boobs, both men and women are fairly rectangular in the torso, and while women’s clothes are occasionally over-fussy, things for men tend to be functional. I like functional.

So which patterns do I like best? The “favorite sweatshirt” on page 68 looks fairly unisex. It’s reminiscent of the wonderful wallaby, but without a hood or pocket. I love the wallaby, along with most of America, so this may be a knittable option. I also really, really like the “collegiate cardigan” on page 80. It’s thick and lush and has some great textures. Unfortunately, it’s knit in bulky weight yarn, so I may or may not work it up for myself. I tend to think I am bulky enough with adding fat yarn to the mix. Same goes for the “funnel-neck sweater” on page 110. I like it, but not in fat yarn.

But here’s a little trick I know. It is totally possible, if you know your gauge in a preferred yarn, and a little basic math, to knit a pattern written for a different weight yarn without re-writing the pattern. Just figure out how many stitches it takes to go around the person you are knitting for in the yarn you want to use, and (provided you can find a close enough match), follow the pattern as written for that number of cast-on stitches. This is super simple to do when using a pattern written for men (for instance) in bulky weight yarn (for instance) and making something to fit a five foot nothing shrimp of a girl in a lighter weight yarn (for real). Most of the time, patterns don’t call for a given number of rows, but just “knit until the piece is x inches long.” Just keep knitting until you hit the desired dimension, which may be shorter than called for, so don’t forget to measure yourself!